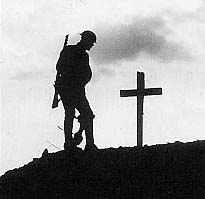 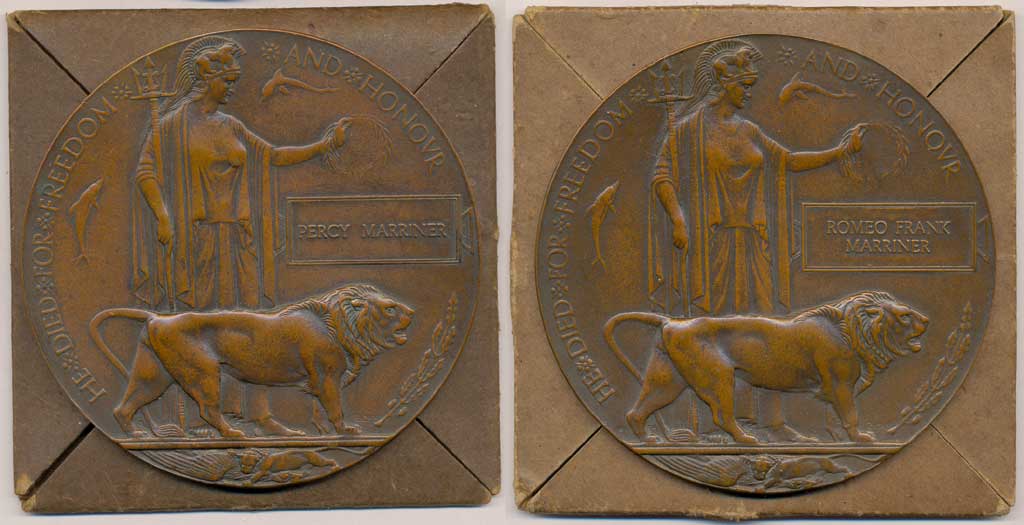 Percy & Romeo Marriner both volunteered to join the Royal Marines in Southampton 1st December 1914. The elder brother, Percy, was born at Fair Oak, near Basingstoke, Hants. 13/7/1893 ; Romeo was also born at Fair Oak 24/7/1895. They both gave their Next-of-kin as their father, Albert D. Marriner, Thatch Cottages, Pilcot, Nr. Odiham, Hants. Below is the form given to Romeo Marriner on 1st December 1914 with written instructions for the train leaving Winchfield on the following day:- 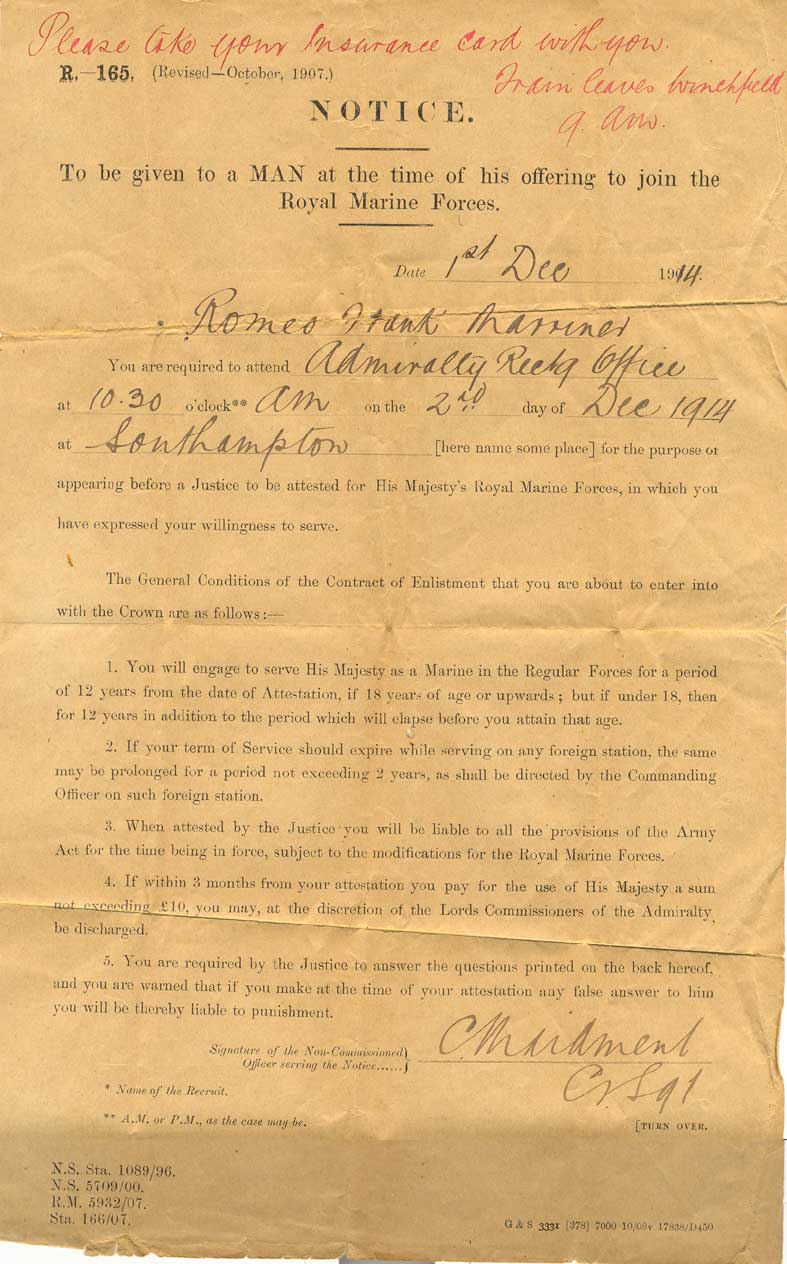 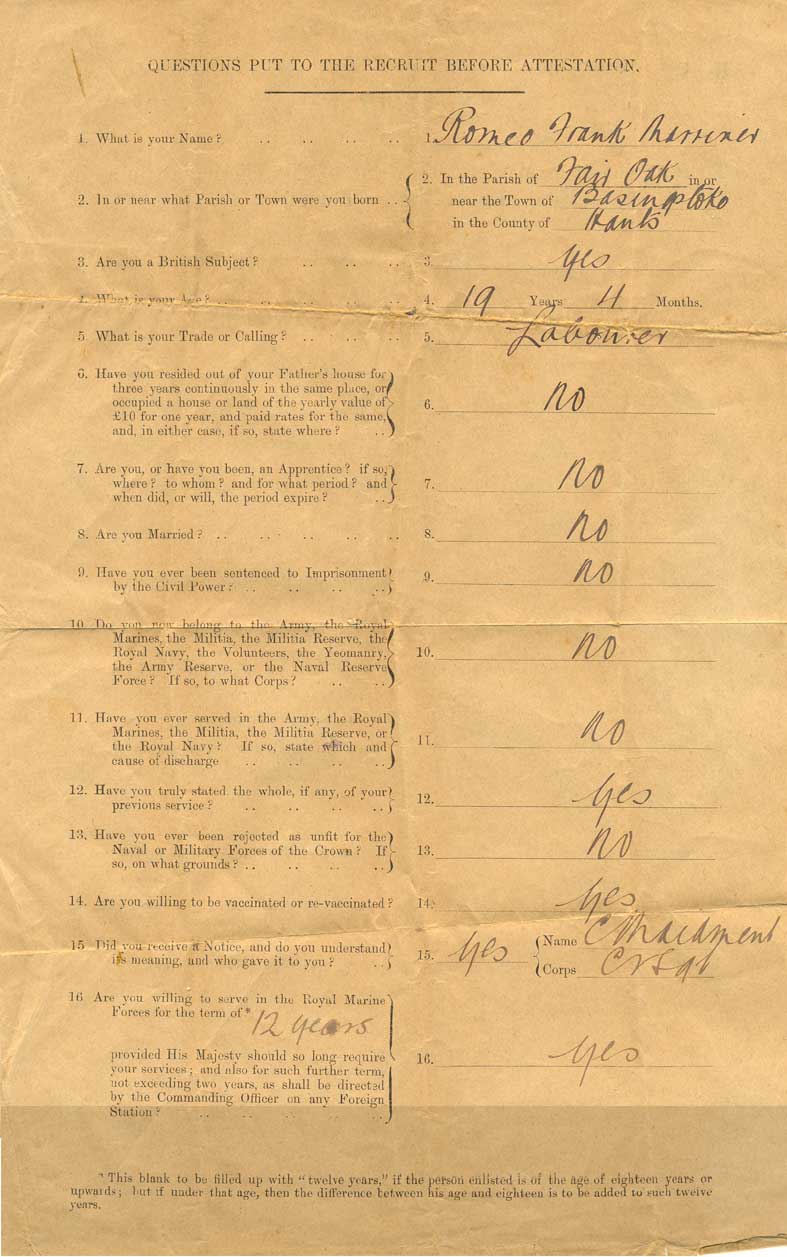 The brothers returned to Southampton 2nd December 1914 & enlisted for 12 years service in the R.M.L.I. They were allocated consecutive service numbers (PO/18240 Percy & PO/18241 Romeo), & were then despatched to the Recruit Depot at Deal in Kent to begin their training, both joining "A" Company. On 26th of May 1915 they were both transferred to "F" Company at the Portsmouth R.M.L.I. Barracks for further infantry training & both passed as 1st Class shots in Musketry 19/6/15. On June 24th the brothers embarked for the R.N.D. at Gallipoli, both joining the Portsmouth Battalion at Cape Helles 18th July 1915.

At this point service information for them virtually dries up, thanks to past negligence of keepers of the Portsmouth R.M.L.I. service papers. Unlike the Chatham & Plymouth R.M.L.I. service papers, which are stored at the Fleet Air Arm Museum in Yeovilton, are very complete & filed in their original service number order, the Portsmouth R.M.L.I. service papers are stored in the ADM/157 class at the National Archives (PRO), are incomplete & resorted into year of discharge/surname order. It is unknown who was responsible for the "weeding" of the Portsmouth papers, nor their resorting into year of discharge/surname order, but the plain fact is they are severely dunuded of useful "active service" information, & the resorting was rather poorly completed, many papers being misfiled & many more being missing (e.g. there is no ADM/157 reference for surnames "G" in 1918).

As a result of the above misfortune which befell the Portsmouth papers, I am unable to find out anything about the active service careers of either brother. The two items required (Army Form B.103 & RND Card Index) are missing from both brothers' papers (they are missing from 90% of all Portsmouth papers). Without these forms nothing can be found about an individual's movements, sickness, UK Leave or postings whilst serving with the R.N.D.

Therefore, it is unknown if either brother went sick at Gallipoli or were removed to Mudros, Malta or Egypt, but it is highly likely that one or both were sick at Gallipoli at some time. The same applies to their service with the BEF, no record of movements, sickness etc. Without this information it is impossible to tell if they were present with their battalion at a particular battle.

What is known from the sources remaining, is that both brothers were transferred to 'A' Company of the 2nd Royal Marine Battalion after the amalgamation with Plymouth Battalion in late July 1915 ; neither appear to have been wounded at any time ; both served at Stavros, Salonika 22/2/16-15/4/16 & both sailed aboard the HMT "Briton" from Mudros to Marseilles to join the BEF 7/5/16. Only one scrap of information was found for their BEF service, in the 2nd (RN) Field Ambulance admission books at the National Archives (Class MH/106), which lists Percy Marriner as serving with 'A' Company of the 2nd RM Bn., admitted suffering from Pyrexia 15/10/16 & sent to the Casualty Rest Station on the same date. It is therefore quite possible that Percy did not rejoin his brother before the attack at Beaucourt 13/11/16. Romeo was listing as "Wounded & Missing" 13/11/16 & assumed dead in July 1917. By that time Percy was dead too, he was reported "Died of Wounds" at Gavrelle, Arras 28/4/17.

In March 1919 Mrs. Frances H. Marriner wrote to the RM Records & appears to have superceded their father as the next-of-kin, although no trace can be found of Mr. Albert D. Marriner's death 1914-19. Mrs. Marriner gave her address as "Oakbank, Brewery Cottages, Sulhamstead, Theale, Berks." It was to her that the medals & plaques were despatched, one set of medals arriving in 1924 to another address at "Hill Corner, Crookham Common, Newbury, Berks." 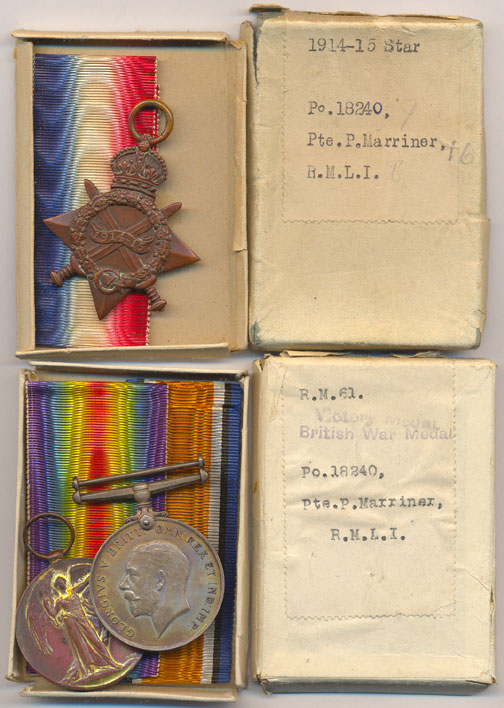 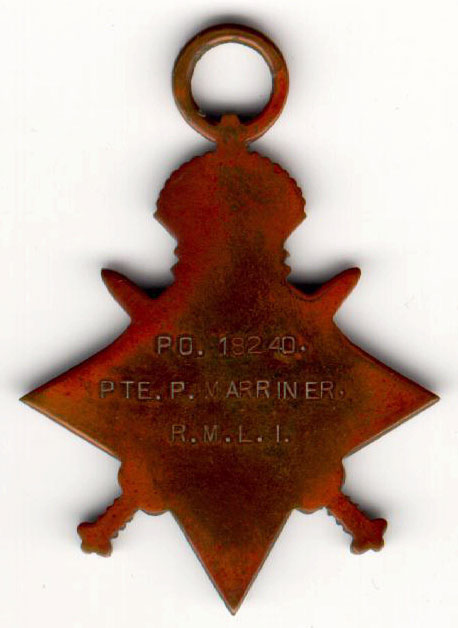 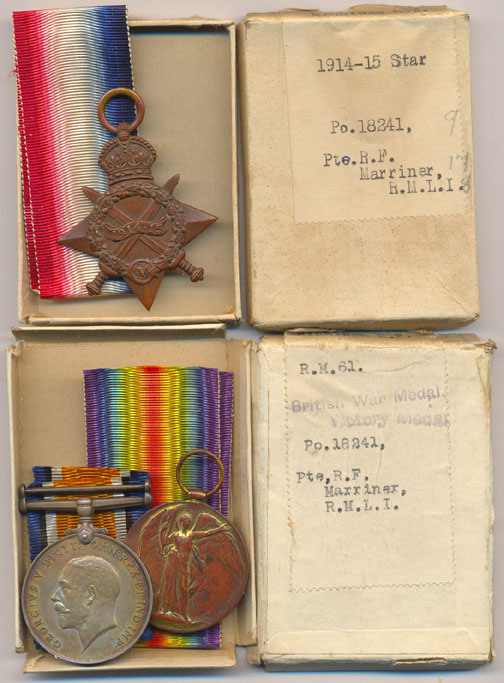 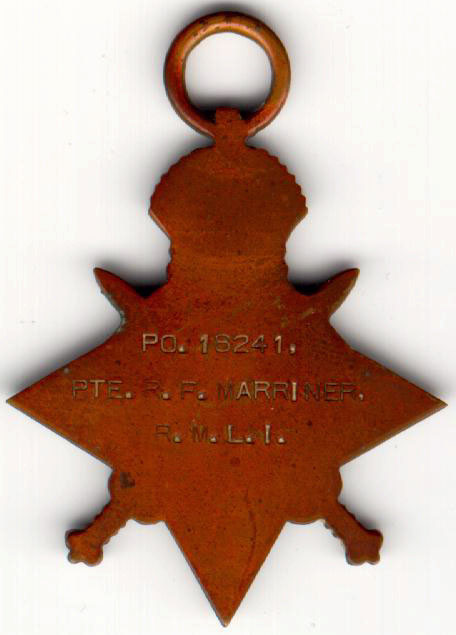 Neither of their bodies were recovered for burial. Romeo Frank Marriner is listed on the Thiepval Memorial & Percy Marriner on the Arras Memorial.

(1) Being rather short of information, I would appreciate any information, photos, & if they are named on any War Memorials in the Fair Oak, Pilcot, Sulhamstead, Theale, or Crookham Common area.